Home / Mala of Merit Blog
Next

In truth, a mala is a mala; whether it is mass produced by an industrial machine or handcrafted by an independent artisan, the benefit is same. If you are looking for validation for spending an exorbitant of money on mala beads, you won’t find it in this article. However, if you want to know what makes mala beads “high quality” as opposed to cheaply produced, please feel free to continue reading.

Before we get into this, it is important to know “What Are Mala Beads?”

Mala beads have been around for thousands of years; however, the exact origin of mala beads is unknown. They are thought to have originated in ancient Indian spiritual practices such as Buddhism or Hinduism. Where they came from is less important than how long they have been used by humans. Their longevity says something about the benefits they possess.

Traditionally, mala beads are composed of 108 beads used for reciting and keeping track of mantra recitations. They typically include a “Guru bead” which represents one’s guru, teacher, or God. Many (but not all) include 3 or 4 “marker beads” (depending on tradition) which help to orient the user on the mala without losing focus on the mantra itself.  The beads are strung together on a cord and finished with some sort of tassel. So… What Is Considered a “High-Quality” Mala?

Let us begin with bead quality: Are they authentic?

High quality mala beads are typically comprised of beads made of precious or semi-precious gemstones, various woods such as sandalwood, or various types of seeds such as lotus or Bodhi seeds.

Lower quality mala beads are typically made of plastic beads, wooden beads which are soaked in essential oils to resemble the fragrance of sandalwood, or gemstones which have been heat treated or dyed to appear as something they are not. One of the best examples of dyed beads which are more prevalent than one might think is turquoise. Turquoise is surprisingly uncommon and expensive; most turquoise on the market is dyed Howlite and not authentic turquoise. In truth, most crystal or gemstone shop owners do not even realize this. Another common imposter of gemstones is dyed glass. This means the beads will feel and look natural simply because they are heavy.

High quality mala makers will often work with gemologists to ensure the authenticity of their gemstones.

Sandalwood is another item that is often counterfeit. Many suppliers will take various types of wood which is then soaked in sandalwood oil to mimic the aroma of authentic sandalwood. True sandalwood is significantly more expensive and more difficult to find. The fragrance of real sandalwood will last for years if it has been well taken care of.

Spacer beads are used between “marker” beads so the user can feel them with their fingers as they pass over them. Spacer beads also enhance the beauty and craftsmanship of the mala. Many cheaply made mala beads will typically be made of plastics or cheap metals with rough edges. Higher-quality mala beads might contain spacer beads made of precious metals such as sterling silver, rhodium, gold, or even platinum! Rhodium is often used as a coating over sterling silver to prevent tarnish. Cording And Why It Is Important

The cording used to string together mala beads should be strong. When a practitioner uses mala beads for mantra recitation the beads moving around causes friction and inevitably leads to fraying. This is an unavoidable situation with mala beads of all quality. High-quality makers of mala beads will do their best to minimize this problem and extend the life of the mala by choosing high-quality cording.

Many mala makers opt for more natural types of cording such as cotton or silk. Cotton is not a very strong fiber and tends to fray rather quickly. Tying knots in cotton string can actually weaken the fibers in the cord rather than strengthening it.

Many cheaply made malas are made with a stretchy plastic string. In my experience, these malas do not last long and are prone to snapping in half with very little effort.

The strongest and highest quality cording that I have found (and I tested many) is a synthetic material called ­­­polyamide. It is far less prone to fraying from normal use and has a high tensile strength which means it is not prone to breaking when pulled. Another strong option for cording is braided nylon. Many (but not all) high quality mala beads are hand knotted. This means that the mala maker ties an overhand knot in between each bead. This is done by hand to strengthen the structural integrity of the mala and to reduce friction of the beads moving around the cord which inevitably results in significantly less fraying and extends the life of the mala. This process is labor intensive and requires a lot of skill to ensure the beads are situated tightly between each bead. Therefore, handmade mala beads tend to cost quite a bit more than ones made by machine.

Handmade vs. Machine Made

Some manufacturers of mala beads use a machine to tie the knots. While this is not a bad thing, it is stepping away from traditional mala making. As mentioned earlier, mala beads have been used by contemplatives for thousands of years and contains a certain amount of ritual.

When mala beads are made in accordance with tradition, the mala maker recites a mantra each time a new bead is added (non-knotted mala beads) or as each knot is tied between beads (knotted mala beads). This is done to infuse the mala beads with positive energy and intentions which is then transferred to the practitioner when it is used. At Mala of Merit, we ensure each mala is blessed in accordance with tradition before it is packaged and shipped to the user.

Machine made malas are devoid of centuries old tradition. Because they are made by machine, there is no opportunity for the maker to infuse the mala with these powerful mantras and blessings. As I mentioned before, a mala is simply a mala. Whether you purchase cheaply made mala beads or high-quality ones, it will serve the same purpose. It is not necessary to spend an exorbitant amount of money on mala beads. However, if you are looking for mala beads that will last for years and are filled with positive intentions, love, and compassion then I would suggest searching for a higher end mala that resonates with where you are on your path.

I read the description of the beautiful Illumination Mala and I felt my spirit light up. I live with a severe mental illness that often leaves me feeling as if I am controlled by my deepest, darkest and most intrusive thoughts. After meditating with my very own Illumination Mala a few times, I was so excited to feel relief from those thoughts if only for a little while. Thank you for this beautiful work and energy you are putting into the universe. My tired mind appreciates the break. I love my Illumination Mala so much, and meditating is no longer intimidating. Thanks again, y’all.

Carly, thank you so much for sharing your experience in this thoughtful and heartfelt review. I am so happy to know that you found relief even if it is only for a short while. One of my favorite teachers, Mingyur Rinpoche always says that it is about 'short moments, many times.' I wish you all the best along your journey and may all beings benefit from your practice.

This company’s service and quality are beyond exceptional. They made my purchasing experience so personalized and professional.It was truly beyond any other I have experienced. They are the real deal. Thank you for putting so much love and pure intention into your products.

Paula, thank you for taking time out of your day to submit such a lovely review. We are thrilled that you had such a positive experience shopping with us! We are always here for you, it truly is our absolute pleasure to help our Mala of Merit family and we appreciate your support immensely!

Thank you for choosing our Empowerment Mala, Russell. I'm thrilled to hear that you love it! The quality and style are both very important to us, so I'm glad to know we hit the mark.

We handcraft each piece with love and care, so I'm glad to know that you can feel that when you wear it. We hope the empowerment it brings you helps you in your everyday life. Thank you for supporting us!

I love my mala. High quality, beautiful and rapid healing. It was shipped quickly and arrives with care instructions and literature. I just bought another mala and I can't wait for it to arrive. A bit pricy, but worth every cent! 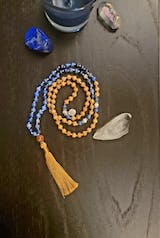 Thank you so much for your review, Irene! We're so happy to hear that you love your mala and that it has brought you rapid healing. We appreciate your kind words about our quality, shipping and care instructions.

We're glad to hear that you will be purchasing another mala and we can't wait to send it to you. Thank you again for choosing Mala of Merit and thank you for the opportunity to serve you!

The mala is exquisite, beautifully made. The presentation is stunning. The insight and guidance into the use of a mala that Mary Lee and Joe provide is invaluable, as well.
I'm already planning my next mala order!

Thank you for choosing to purchase a Serenity Mala, Liz. I'm so glad you love it! The craftsmanship and presentation are both very important to us, so we're thrilled to hear that you appreciate them.

The guidance we try to provide about the use of malas is invaluable, and I'm so happy you found it helpful. If there's anything else they can help with in the future, please don't hesitate to reach out. We hope you'll continue to enjoy your mala through many stages of your journey.