As Each knot is hand-tied, we recite a traditional mantra to ensure you will feel comforted and at peace the moment you receive your mala.

Your Mala of Merit purchase helps others: 2% of your purchase is donated to the Tibet Fund charity on your behalf.

As the last knot is tied securing the tassel, your mala is sealed with a single intention: To Help

I am very happy with the one I chose, Empowerment..a gift to myself. I cant see delicate work went to do this Mala. I can tell there was a lot of love instilled while making it! Excellent choice of moonstone and labradorite that compliment each other so much. The pictures really don't do this mala justice. Such a beautiful work of art. Thanks, Mala of Merit!

Thank you so much for your lovely review! I'm sorry that the photos didn't do justice for your beautiful mala (not that its a bad thing :) We are so happy that you love it and we hope it brings you a lot of happiness and peace.

E
Erica R.
I bought the empowerment for myself.... I love it!

I love how they're beautifully made and have great quality, but what really amazed me was how much thought went into their packaging. When my boyfriend saw this gift for us both he said "These will be perfect because we can share." The empowerment message behind these pieces is outstanding too - it's always nice when someone else notices your gifts as well-not just yours alone ;)

Thank you, Erica, for your kind words! I'm so glad that the Mala of Merit has been a blessing to you and your loved one.
I hope that you will continue to enjoy it as much as we have enjoyed making it.

I'm so happy I found this site! The malas are perfect, and they arrived quickly. Plus there's a nice sturdy box to keep them in too-it'll make storage easier when not wearing my mala around town :) My favorite part: "heft" of the beads; feels really well crafted (even though some other sites' strings were shorter or had that stretchy feel). 100% certain you won't be disappointed I love my "Empowerment Mala". Thanks Mala of Merit :)

Hi Tim, thank you for your review! We're glad to hear that our malas are a perfect fit and you appreciate the storage box we included.

We take pride in the quality of our malas and it's wonderful to know that we've been able to exceed your expectations. Thank you again for taking time out of your day to share this with us--we really appreciate it!

Yes! Like each of us, we will have flaws and never find another like us, your mala is the same…. and that’s a good thing. Our mala beads are natural and will have slight size and color variations from bead to bead, this is normal and adds character to each and every mala.We only use ethically sourced high-quality natural, never dyed, or treated semi-precious gemstones in our malas. Many of the less expensive malas you will find are using dyed or treated lower-quality beads in their malas to save on costs and make the gemstones look identical in shape and color. These may look better initially due to consistent bead color but over time the dyes and colors will leach the chemicals and fade from the gemstones.

Our malas are much more to us than just a product that can be manufactured by a machine. A mala made by us is always handmade following traditional mala-making methods. Every mala bead is strung and as each individual knot is tied locking the mala bead in place while a mantra is recited to bring love and goodwill to the new owner. This takes more time, and we are not able to make them at the same cost of a machine, we know that a Mala of Merit means more the moment you put it on and feel our love and energy that comes with it that no machine made mala can replicate.

Every part of your mala was selected not based on cost but by the impact on the environment and lives of those who helped make it in mind first and foremost. Our mala parts are sourced from multiple locations around the world. With each partner we work with that provides parts of the mala we have done everything within our power to ensure that all parts of your mala came from a reputable manufacturer that meets our high standards of ethics.

Note-With gemstones unfortunately we are not able to trace them back all the way to the mines and verify this….we spent hours trying, and to be honest almost anyone who says they have may be stretching the truth, it’s just not possible as beads will come from separate mines around the world.

Absolutely!!! The moment you partner with us and purchase a Mala of Merit, you begin helping others. We utilize the "Shop for Good" application. It automatically donates a portion from your purchase made on our store directly to the “Shop for Good” app the moment you pay.

We have elected to donate all proceeds to The Tibet Fund which is a 301c Non-Profit. If you would like to learn more about The Tibet Fund, click HERE.

We are a small company and as we grow with your help the donation will assist in providing Tibetan communities with solutions to poverty, hunger, education, cultural preservation, and other basic needs.

Good job, look at you helping others!

We believe in helping anyone we can, and your mala is something you love and connect with that empowers you to improve with the hopes that you will continue to pay it forward and help those around you improve.

We all have ordered things online, get super excited like a kid at their birthday party, open the box and it’s not even close to what we expected, it looks nothing like what you purchased, doesn’t fit, or was not even close to being anything resembling quality.

Other Malas You Will Love

I'm so pleased with the beautifully crafted Mala I received! You can feel the quality and see the beauty of the beads. This is what you want when you choose Mala, something that as it is made is touched by someone who understands it's purpose. Not some mass produced item made with little thought to where and to whom it will be go.
Thank you!

Thank you for taking the time to write a review of your new Perseverance Mala, Tricia. We're so happy to hear that you appreciate the craftsmanship and care that goes into each one. Thank you for choosing to wear and bless it with your practice.

If you have any questions or concerns about your mala, please don't hesitate to reach out to us. We're always happy to help in whatever way we can.

Great piece, I love it, my friends do as well, thankyou 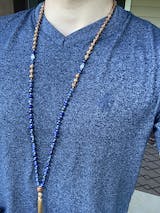 Thank you for your kind words, Ben! We're so happy you love your mala and that your friends do too. Thank you for choosing Conscious Healing Mala and for supporting our small business. It means the world to us.

If you ever have any questions please don't hesitate to reach out to us. We're here to help!

I absolutely love my mala. You can feel the love that went into making it.

Thank you for purchasing the Perseverance Mala, Tara. I'm so glad you love it! The design was created with a lot of love and intention, and I'm happy to hear that you can feel that.

If there is anything else I can do for you in the future, please don't hesitate to let me know. Thank you again for your support!

Thank you so much for taking the time to leave a review for your mala! We really do appreciate it and you!

I just received my first Malas - Conscious Healing, Divine Grace and Unconditional Love and am in Love with them! They are stunningly beautiful and I could not be happier, much Love and Gratitude, Thank You! ❤️

Thank you for your kind words, Patrick! I'm so glad you love your new Malas and that they bring you such joy. Thank you for supporting our business and helping us spread the message of love and healing. We appreciate you!